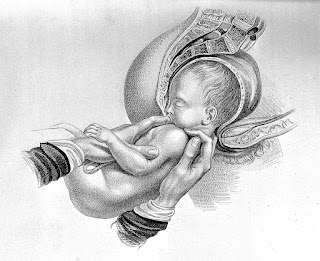 Breech birth is a variation of normal. Hopefully you’ve heard this before, but oftentimes parents carrying breech babes are met with dead ends and discouragement that leaves them with the idea that their baby or body hasn’t done its job properly. Before we go any further, allow me to repeat myself. Breech is a variation of normal, occurring in 3-4% of term pregnancies. Breech fetal presentation means our body, which has answers no text book can teach us, has chosen this position for reasons we may not understand. Remember, things are not inherently bad or dangerous just because we don’t understand them. It just means we have knowledge to gain.
What’s important to know is that vaginal breech birth is absolutely possible, and not only that! Vaginal breech birth, when properly supported, can be totally safe. While many providers may push a planned cesarean, you have the right to decline.

If breech presentation is normal, why are discoveries of Breech babies met with a frenzy of ECV conversations, cesarean planning, chiropractics, and desperate attempts to flip Baby head down? Allow me to be realistic with you. When a breech baby is born vaginally, there are some risks. In most cases these risks do not outweigh the risk of a major abdominal surgery, but they are there. Having a head down baby does alleviate some of that worry and in all cases, lower risk means safer. If we can encourage baby to flip, let’s do it! So what are the risks? The hot topic risks we hear of are cerebral palsy and neonatal mortality. A study published in 2017 looked into these risks and found that vaginal breech birth showed no variation in cerebral palsy rates in comparison to head down vaginal birth. However, it did find an increase in rates of neonatal mortality. While a sure increase was noted, the increase is marginal in comparison to neonatal mortality rates in breech cesarean birth. The risk of fetal demise in a head down vaginal delivery is 0.3 per 1,000 births. The risk of fetal demise for breech cesarean is 0.8 per 1,000 births. The neonatal mortality rate for vaginal breech birth? 0.9 per 1,000 births.
Another risk of breech birth is umbilical cord prolapse. This occurs when the baby’s body compresses the cord against other structures within the womb and in some situations the cord may even slip into the birth canal. Umbilical cord prolapse is considered an emergency. When the cord is compressed, it reduces, or entirely cuts off the flow of blood and oxygen being delivered to your baby. If not addressed quickly, this event can lead to fetal demise. It is important to note that umbilical cord prolapse is a risk even in head down deliveries, and can be the result of too much amniotic fluid, water breaking before labor begins, you have a low lying placenta, or you have a small baby.
The bottom line? Breech birth comes with risk, but with proper support these risks can often be managed and avoided.

Another reason we meet breech discoveries with attempts to flip baby is because a majority of providers refuse to vaginally deliver a breech baby and instead immediately push parents to consent to a cesarean. If asked why they recommend this, they will cite the risks we discussed above. Here’s what many won’t tell you- 1. It comes down to liability over patient satisfaction and 2. They don’t know how to deliver a breech baby. Why? Because they were handed a license to practice medicine without ever having to learn how to handle and deliver this totally normal and often safe fetal presentation. This fact is disparaging when you put it into perspective. We entrust obstetricians with our entire pregnancy, our well-being, and our baby’s well-being. They are supposed to be the experts, yet here they stand before us scheduling us to have a major abdominal surgery because they don’t possess this very basic knowledge. What a broken system it must be to have experts who lack expertise. In fact, it’s midwives who are most often taught how to deliver breech babies, while a majority of obstetricians continuously fall short on the knowledge.

Let’s say you get the news that your baby is breech. What are your options? Thankfully you have a few. First and foremost we always try to start with the smaller things and work our way up to the larger ones. Safe sitting is always a great starting place. Things like ensuring that your belly button is always parallel to the floor, sitting on a birth ball instead of an office chair, etc… We have a great safe sitting guide you can find here. Along with safe sitting we use spinning babies to help make enough space to encourage Baby to flip. From there we might do moxibustion, acupressure, chiropractic work, etc… If all else fails we may explore the option of an external cephalic version (ECV). An ECV is a procedure where your provider will manually turn your baby from the outside by pressing against your belly.
In the event that you have decided to vaginally deliver regardless of how your fetus is presenting, you can skip right to finding a breech educated provider, as well as a breech educated doula, and work on a plan of action with them. It may be that some parts of your dream birth plan can’t work out, but with the right provider and doula you can and will maintain a sense of control over your birth. All in all, breech presentation is a hiccup, but it most definitely doesn’t have to derail your entire birth, and it certainly doesn’t mean your baby or body are broken.
This blog was written by a former Tranquility by HeHe birth doula.