The Truth about Glucola Alternatives 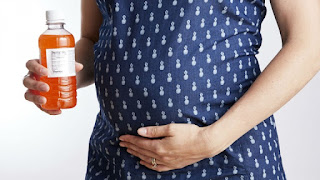 The Truth about Glucola Alternatives

What is gestational diabetes and how do we diagnose it?

Gestational diabetes testing is a routine screening that almost all pregnant parents will encounter around 26 weeks gestation. To get the big picture of why we screen for this we should discuss how the pregnant body metabolizes sugar in comparison to a body that isn’t pregnant. So let's dive in. When we eat carbohydrates (think bread, rice, pasta) our bodies break them down into glucose. This glucose is what gives us energy as we go through our day, and it is aided by insulin, a hormone produced by the pancreas. Insulin is also capable of turning excess glucose into stored fat. So how does this differ from how glucose is metabolized in a pregnant body?
Think of hormones as the catalyst for nearly all bodily functions. Hormone levels in pregnancy are wildly elevated, and these higher hormone levels can actually impede the body’s ability to use insulin as efficiently. We refer to this as insulin resistance. In some cases our bodies may need up to three times the amount of insulin to metabolize the same level of glucose. These changes are normal and expected in healthy pregnancies. However, when we see the body producing that extra insulin and still not being able to metabolize the body’s glucose level, we deem that too insulin resistant and often diagnose the mother with gestational diabetes.

So how do we carry out this screening?

The glucola drink, often marketed as fruit punch or orange juice flavored, has spanned the nation far and wide and become readily available in all maternity care offices. This drink, containing 50mg of dextrose, a sugar derived from corn syrup, along with citric acid, food dyes, brominated soybean oil, and modified food starch has been considered as harmless for many decades, but have recently come under scrutiny because of both its heavy amount of dyes and the brominated soybean oil. Food dyes have long since been discovered to be less than great for the human body, but the brominated soybean oil being both banned in Europe and marketed as a flame retardant, has parents searching for alternatives. Thankfully to a handful of recent studies, they haven’t had to look far.

What are the alternatives?

In 2014 a small study looked into switching glucola for strawberry flavored hard candy and found that not only did the candy alternative test, sensitivity wise, the same as glucola, it also lead to a lower false positive rate. This study deemed that any sugary food or drink that contained 50g of sugar could be a safe and reliable alternative to the typical glucola drink that so many providers still push. As these findings are being further studied and confirmed we have seen the options expand to things like pancakes with syrup, a handful of jelly beans, and orange juice. The lower rate of false positives has also been noted to be supported by the differing rates of gestational diabetes diagnosis among the US and other developed countries. In many European countries, these alternatives have been part of standard care for several years. A group of nearly forty studies found that Europe’s rate of GD diagnosis is roughly 5.4% of pregnant parents. Whereas the US, still widely using glucola, has a diagnosis rate of 10%. While these studies support this hypothesis, it should be noted that they did not include the varying rates of obesity amongst these countries in their publications which may skew the numbers slightly.
One option for some parents is a relatively new product known as Fresh Test. This drink is marketed as gluten free, vegan, is free of artificial dyes and flavors, and carries the same 50 gram sugar load that glucola carries. One major plus of this product is the short and concise ingredient list. Included in this list are citric acid, lemon oil, lemon juice, and organic peppermint leaf powder, but it is worth noting that it still contains dextrose just as glucola does. While marketed as gluten free and vegan, it is produced in a facility that handles wheat, soy, tree nuts, peanuts, eggs, milk, and shellfish. For many parents, this product may be a perfect alternative to traditional glucola. However there is a dye and flavor free version of glucola should you prefer that.

While this article has no intention of standing in as medical advice, it is meant to inform you of your options and encourage an open conversation between you and your provider about whichever screening method feels most aligned to you and your baby. That said, we understand that having these conversations can feel scary and intimidating. So let's take a moment to lay out a few ways you can advocate for your preferences. These conversations can happen whenever and wherever you are comfortable. If you go into pregnancy knowing you won’t be utilizing glucola, you are welcome to have this conversation as early as your first prenatal appointment. Or maybe you plan on waiting until closer to when you’ll do the actual blood test. The call is always yours! Here are a few examples of how opening this conversation can look:

You: So I understand that this office mainly uses glucola for gestational diabetes screening. However after looking at the research I’ve decided that I’d much rather use one of the alternative methods, such as a juice cocktail, a sugary breakfast, or the FreshTest beverage. Is there an alternative that you prefer over the others?
You: I know that my glucose test is coming up very soon and I wanted to take a moment to ask you a few questions. Your knowledge is valuable to me and I’d like to consider it in whatever decision I make pertaining to this test. I have been reading a lot about glucola alternatives, and after looking at the ingredient list of glucola I am really leaning towards choosing an alternative. I know you may prefer your patients to use glucola, but since that doesn’t feel aligned with my needs I’m hoping you can advise me on which alternative you think would be most reliable.

From here, there are two outcomes. Your provider will either pushback, or they will engage in a conversation and offer their opinion. Let’s take a moment to discuss why we might see pushback. First and foremost, Drs can be creatures of habit just like the rest of us. Perhaps they’ve been practicing for forty years and glucola is the only thing they’ve ever used. Letting go of something that feels so reliable might feel counterproductive to them. Or maybe they haven’t read the research. We tend to forget that continuing education requirements for physicians are abysmal and can be used for holistic specialties such as acupuncture. It’s entirely possible that a dr just hasn’t read the research. One of the biggest reasons we see pushback is because many Drs have doubts about the reliability of putting such a test in the hands of the patient. Human error seems to be a large concern among physicians. Handing a patient a 10 ounce bottle of perfectly portioned and formulated glucola seems so much more reliable than a patient with a plate of pancakes and a bottle of syrup. Let’s take another minute to explore what the conversation might look like after a bit of pushback.

Doctor: I know there has been some nuance around glucola, but we use it because it is reliable and it yields the most accurate results. I know there’s a lot of stuff on the internet that can make it seem bad for you, but it’s no worse than a soft drink.
You: I understand. I know it’s been around a long time and I thank you for explaining why you recommend that I use it, but it just isn’t aligned with me so for right now I am giving my informed refusal for glucola, but I would really like to know which alternative you recommend. If at any point I test high for blood sugar, we can revisit this conversation then. I really appreciate you taking the time to give me your feedback.

At the end of the day, it’s important to know that your care is always squarely in your hands. While some providers may push for glucola, it’s ultimately your hands that will put the bottle to your mouth. What’s in that bottle or on those pancakes is entirely up to you. What is most important is that whatever choice you make is informed, and aligns with your needs. While providers may have a preference, if that preference doesn’t match yours? Well, informed refusal is your right.