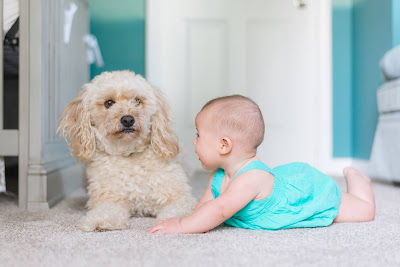 I'm really excited about this because I think these are things that you're going to want to know before your baby gets here, but nobody tells you.

Today we are sharing an interview with Kara Masse, who graduated with her doctorate in physical therapy in 2013, from Simmons college. She's been a pediatric physical therapist for seven years now. And she started her career in early intervention, just like me. She's a certified early interventionists and now she actually works in outpatient setting for Mass General in Boston. It seems like we all kind of know bits and pieces babies, but nobody knows the nitty gritty about their physical development. And that is what Kara is going to share with us today.

What is it that you do with infants every day as a pediatric PT? If you know, if somebody is out there listening and they've never heard about that, what would someone come to you for?

So a lot of times, we will get referrals for delays in motor development like abnormal tone. So just the way that their muscles are moving or if they don't seem to be following their normal development. With infants we do see some common muscular skeletal problems, such as hip dysplasia, club foot, or a very common diagnosis called Torticollis.  Torticollis is tightening of the neck muscles, which can lead to Plagiocephaly- commonly observed as flattening of the head.

And about what age are these children? Are you talking about newborns because there are some babies that, during birth they actually experienced and get hip dysplasia. Would they come to you as a newborn?

It depends on the severity of it. it depends on sort of what the treatment protocol is for the different diagnoses.  For hip dysplasia, it depends if they end up needing bracing for example.  For Torticollis, I do see a lot of newborns. I will get referrals around two to four months of age usually. We do recommend the earlier the better, so you can get ahead of any sort of abnormal neck movements or tightness that's there.

If your pediatrician doesn't give you a referral, can parents self-refer to you or where would parents go if they were concerned?

Most of the time you're not able to self refer to physical therapy in the outpatient setting. If your pediatrician is hesitant about referring, and you have concerns as a parent, I would push for it and just say, 'you know, I'd rather get it checked out now'. If you are noticing some flattening of the head or you really feel like your child has trouble turning to one side, or they always look in one direction you want to get referred for Torticollis.  I don't find too many pediatricians are reluctant to refer, but if they are, for some reason early intervention would be the way you could self refer.  They would evaluate your child and determine eligibility.

Let's dive into Torticollis because I think there's so many parents out there that are listening thinking, 'Oh my gosh, what is Torticollis? Does my child have it? How do I fix it? What do we do? Where do we go? Who do I talk to?' So can you explain to us what Torticollis is, how it happens, and what can we do probably starting at birth so that we don't get to two months and start seeing signs of Torticollis. Is that possible?

So most parents end up noticing the plagiocephaly, the flattening on one side of the head, first. A lot of times parents won't realize until a little bit later, 'Oh yes, my child doesn't turn their head to both sides easily'. What they will notice is that when they pick their child up, the head might look a little flat on one side and that's because they're spending more time on one side of the head than the other. Most of the time with plagiocephaly it's caused because one of the muscles in the neck, the sternocleidomastoid, which is the muscle in that's involved with Torticollis, that muscle is tight. This tightness causes the head to turn to one side and they kind of get stuck there. So typically they say that this happens because of the position that they were in the womb where they weren't moving as much and then they get kind of 'stuck' in a position.

This diagnosis is considered a congenital diagnosis, so it's something they're born with. It's not always preventable. The biggest thing is in the first few weeks to a month, you want to start noticing, are they doing visual tracking and are they able to follow you to both sides and move their head to both sides easily? A lot of parents also notice that when their child is sleeping, they may only have their head looking to one side when they sleep. There's been a huge uptick in plagiocephaly ever since the 'back to sleep' campaign in the early 2000s, because of the way they're positioned to sleep. The 'back to sleep' campaign has done so much more for other issues like SIDS and things like that, but it can make them more prone to neck preferences.

So it kind of goes back to balancing that back sleep with enough tummy time throughout the day. So that that head gets that balance and they're not always laying on the back on their head?

That is amazing. So I personally love tummy time. I know a lot of children don't like it. You can totally make tummy time fun and engaging and like where your baby likes it. Remember your baby's going to have a learning curve. Everybody fights back on new things. So just to give them the space to learn to love tummy time, because it will eventually get to a point where they have independence there. They can lay on their tummy, they can reach things, they can bring it to their mouth. I have one last question about Torticollis. If your child is tight, let's say they're looking to the left and they are favoring the left the most. Does that tell us that the neck on the left or the right is tight? Is it the same side that they favor or the opposite side?

So that is a tricky question.  There are a few different types of Torticollis.  Depending on how they are presenting and which muscles are really involved. With classic Torticollis if your child favors the left, as in is looking to the left, then most likely it's actually the right side that's tight. The muscle involved does opposite actions where it tilts the head to one side, but turns to the other. So their head would be tilted to the right, but turn to the left. Occasionally, there are certain instances where a kid may be tight on the same side. We actually see that a lot in kids who have reflux. There is relationship between Torticollis and reflux. It's more of a posturing effect that infants do to help relieve the pressure or the heartburn from reflux. Hence, they are both favoring and tight on the same side.

Isn't that so interesting that their body kind of knows how to cope with that reflux or that heartburn. Of course. I mean, I guess it's at the expense of their neck, but wow. At their body's intuition, I think I'm just kind of blown away by that. That is that's amazing.

Right. So I think it's something if you feel like the child, if their head is sort of a little off center or they have trouble turning to one side and they either have reflux or you're just noticing that they're not moving it while it's great to have someone take a look to see if there's anything going on there.

Right. So, the biggest thing that we worry about first with Torticollis is the repositioning techniques for the plagiocephaly. So being able to reposition them and the flattening is not getting worse. So turning them on opposite directions in the crib when you put them to bed so they're not always facing the same way.  Tummy time again is just the best thing to do because they're off their back. But also tummy time is great for torticollis because in that position the muscle that is tight actually gets canceled out by the neck extensors when they lift their head. They're able to move side to side easier than when they're on their back.